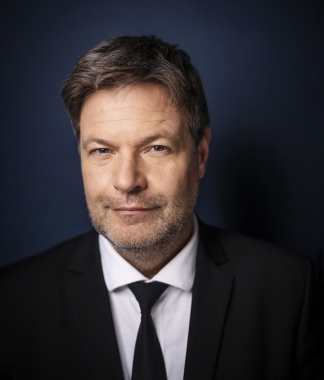 Dr Robert Habeck has been Federal Minister for Economic Affairs and Climate Action since 8 December 2021.

Since 2021
Member of the German Bundestag

2017 - 2018
Deputy Minister-President and Minister of Energy, Agriculture, the Environment, Nature and Digitalisation of the Land of Schleswig-Holstein

2012 - 2017
Deputy Minister-President and Minister of Energy, Agriculture, the Environment and Rural Areas of the Land of Schleswig-Holstein

Education and other professional activity

1991 to 1996
Studied in Freiburg im Breisgau (German language and literature, philosophy and philology), Roskilde/Denmark (humanities) and Hamburg (literature and philosophy), graduating with a Master’s degree

Dr Robert Habeck was born in Lübeck on 2 September 1969. He is married and has four children.