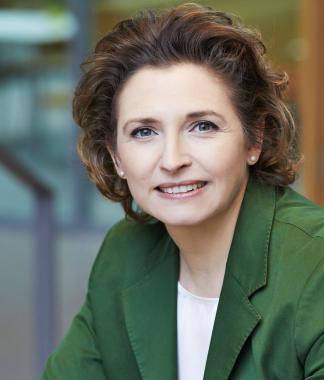 MP Nicola Beer, FDP’s lead candidate for the European elections, has been the party’s Secretary General since 2013.

She is currently representing Frankfurt am Main in the German Bundestag.
Before, Beer was a Member of State Parliament in Hesse where she served as speaker of the FDP parliamentary group’s committee for Science and Art as well as the committee for Europe. In addition, Beer was State Minister of Education and Cultural Affairs in Hesse (2012 and 2014) and State Secretary for European Affairs at the Hessian State Ministry of Justice (2009 and 2012).
She was first elected into the State Parliament of Hesse in 1999 and served as Managing Director (2003-2008) and Deputy Chairperson (2008-2009) of FDP’s parliamentary group. Before joining the State Parliament, Beer served as city councilor (1997-1999) and deputy head of town council in Frankfurt am Main (in 1999).
Beer received a bilingual school degree (Abitur) in German and French and studied law at the University of Frankfurt where she also joined the FDP in 1991.