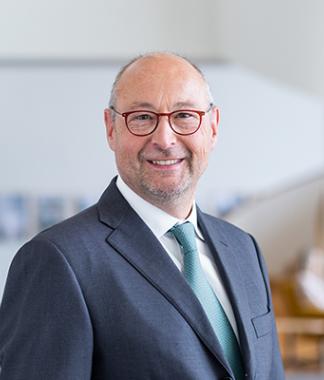 Rolf Buch has been CEO of the Management Board of Vonovia SE since April 2013.

He was born on April 2, 1965, in Weidenau, Siegen, Germany. After studying mechanical engineering and business management at RWTH Aachen University, he began his career as an assistant to the management at Bertelsmann Distribution GmbH in Gütersloh in 1991. In 1996, he was promoted to managing director of Bertelsmann Services France and became a member of the management board of Arvato AG in 2002. In 2008, became CEO of Arvato AG and was appointed to the management board of Bertelsmann SE & Co. KGaA.
He is a member of the executive board of the German Association of German Housing and Real Estate Companies (GdW), vice president of the German central real estate committee Zentraler Immobilien Ausschuss (ZIA) and the German Association for Housing, Urban and Spatial Development, and chairman of the European Public Real Estate Association EPRA in Brussels. Upon taking up his office, Rolf Buch led Vonovia as it entered the stock exchange. In 2015, the company was promoted to Germany’s leading stock index, the DAX.
Rolf Buch is married and has two children.