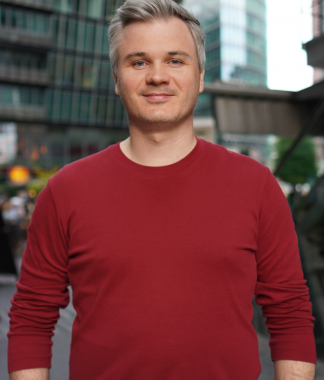 Valeriy Bykanov was the Founder & CEO of X1 Group, which was acquired in 2021 by Globaldev Group, where Valeriy is now a Board Member.

Started his career in the IT industry after graduating as a Master of Computer Science from Kharkiv National University of Radioelectronics (Ukraine) in 2004. After working in several Ukrainian IT outsourcing companies, he founded X1 Group to support German fast-growing tech companies with Ukrainian tech talent. Since 2016 mainly living in Berlin.

Moreover, Valeriy founded one of the first co-working spaces in Kharkiv, Ukraine back in 2009. As well as supported several tech ventures as Tech Advisor and CTO. Learned with Executive Education programs from the London Business School (LBS) and the London School of Economics and Political Science (LSE). Now also acting as a pro-bono Mentor as part of The Mentoring Club in Berlin.

Hiked in the Himalayan Mountains, chased Auroras in Arctic Circle and training for his first Berlin Marathon now.